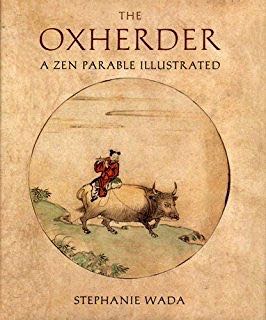 A 12th century Chinese Zen master created, “The Twelve Oxherding Pictures” which have been a source of instruction and inspiration for Zen Buddhists down to the present day.

Briefly, the pictures (black ink sketches with commentaries) show the various stages of enlightenment, from the very beginning, “Seeking the Ox”, through, “Finding the Tracks of the Ox”, “Catching the Ox”, “Riding the Ox Home”, and finally, “Entering the Marketplace” (having forgotten both the Ox and the self).

My suggested new “Ox Picture”, intended to illustrate the central problem of aikido is, “The Parrot Riding on the Ox” (See illustration, courtesy Jane Maric.), i.e,  The Paradox!

We are faced with this paradox in the very name of Aikido,“The Way of Harmony”, and even more so by the description of aikido as, “The Martial Art of Peace”!

What is “harmonious” about twisting someone’s arm and throwing them to the ground?

And how can you possibly reconcile “Peace” with “Martial”, since the latter means “Warlike”?

I do not propose to attempt an answer to this riddle here but suggest it is worth thinking about, and perhaps is just as difficult to understand as such Zen riddles (koan) as, “What is the sound of one hand clapping?” or, “What were you before your mother was born?”

Behind aikido’s “philosophy” there is an implied link to a gradual process (perhaps of 10 stages, perhaps more, perhaps less) of enlightenment, as in Zen.

All of the “Do”, i.e., “Ways”, including aikido, are assumed (by the Japanese at any rate) to be spiritual disciplines leading to enlightenment, or as Trevor Leggett put it in the book I mentioned in my last blog, “The martial arts are fractional expressions of Zen.”

The best book on Zen in English is, “The Three Pillars of Zen”, by Philip Kapleau.

This is a wonderful book that cuts through much of the mystery to get to the heart of Zen through the experience of the author over years of hard training, and is the first-ever translation into English of the “dokusan” dialogues between a Zen master and his disciples. It includes the personal experiences of Westerners training in Zen.

Read it and I believe you will get some insight into the paradox of aikido, and see many parallels in our dojo training, not the least of which is the message that it is only by training, and more training, that any deep understanding can be expected.

Kapleau’s reply to a question put to him in the US I found very relevant too:

Questioner: Do you think there are cultural and personal limitations to an enlightened person?

Kapleau: This is a very intriguing question. My own feeling is that everyone, enlightened or not, is to one degree or another hostage to their own culture. This is one of the great handicaps that I think every foreign teacher has who comes to North America to teach. It’s extremely difficult for them to let go of the cultural forms that they grew up with, that they’ve practiced since they were children.”

(I hope to go into this question of “the culture gap” in more detail in a future blog.)

I still have a letter I received from Philip Kapleau decades ago while I was in Tokyo and he was in Kamakura (working on the book) in which he gave me some valuable advice on how to cope with the culture shock and general exhaustion I was experiencing when training hard and trying to survive in a very alien world. To quote part of the letter:

“It’s only years later that you see that you being what you were at the time, what you did then could not have been done otherwise. After all, what we are all seeking, whether we are consciously aware of it or not is self-understanding, or Self-contemplation. There is no one place or one way. Therefore accept everything that has happened to you as inevitable, and be grateful to everyone who has been responsible for giving you a helping hand.

“Take care of yourself. I mean this literally. In my experience in Japan nothing is more discouraging, and even fatal, than that feeling of helplessness which comes when one is utterly exhausted either from overwork or from the lack of proper food.”

Incidentally there is another link between Philip Kapleau and New Zealand in the shape of the Auckland Zen Centre headed by Amala Wrightson who trained under him and under his successors after he passed away.

I have dabbled in Zazen meditation (the main “sitting” discipline of Zen) both in Japan and at home, but cannot claim any long-term consistent experience of it. Some of my aikido teachers insisted that it was unnecessary to practise Zazen so long as one were practising aikido. They may have been right (or wrong) but at any rate both Zen and aikido require serious dedication and the involvement of mind, body and spirit, if they are to be properly understood.

There is no paradox about that.

If you find Buddhism, Shinto and other Japanese spiritual practices difficult to understand or unduly alien I would highly recommend another book (available in Kindle format), “Waking up: Spirituality Without Religion”, by Sam Harris.

Harris (an atheist and neurologist) clarifies the importance of “spirituality” in all our lives, whether in the East or the West, and provides a universal scientific explanation for the psychological value of spiritual disciplines.

He explains the difference between the everyday “self” and the “Real Self, or Consciousness” that we all possess.

His book may help us to see the hoof prints of the Ox.